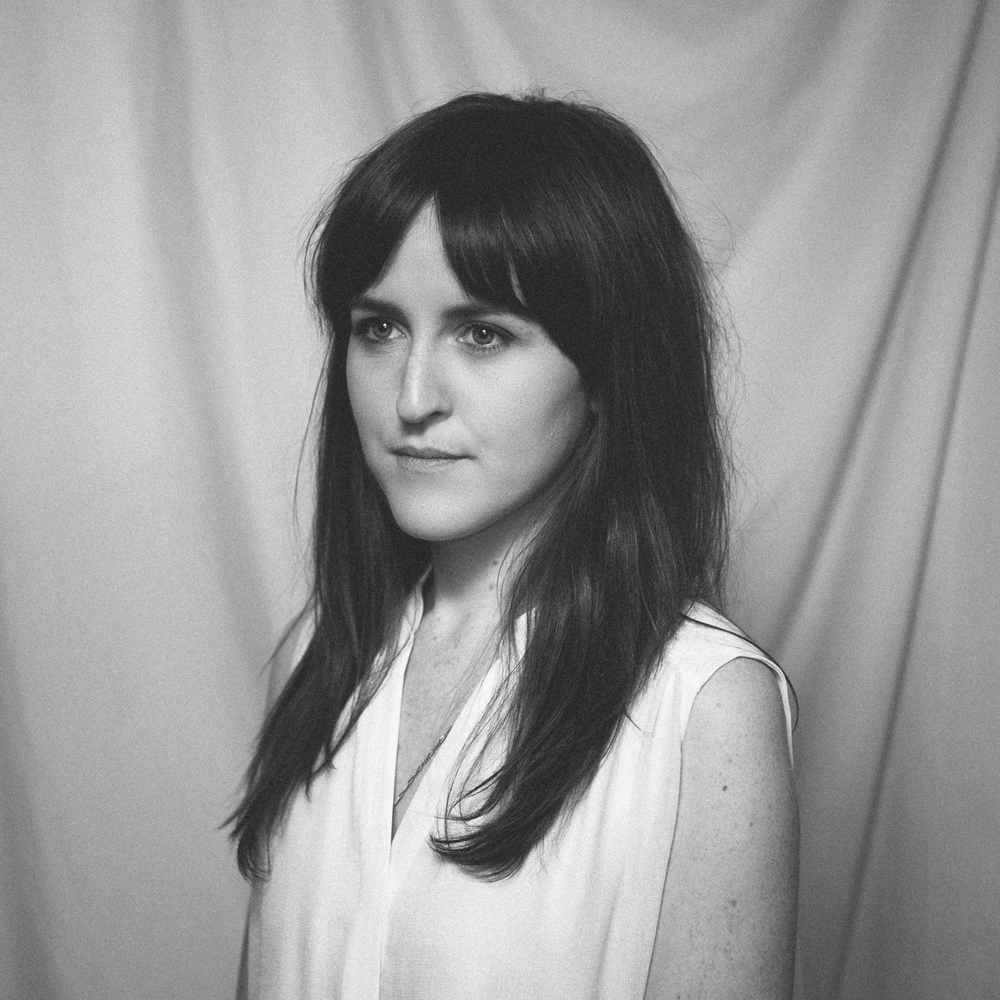 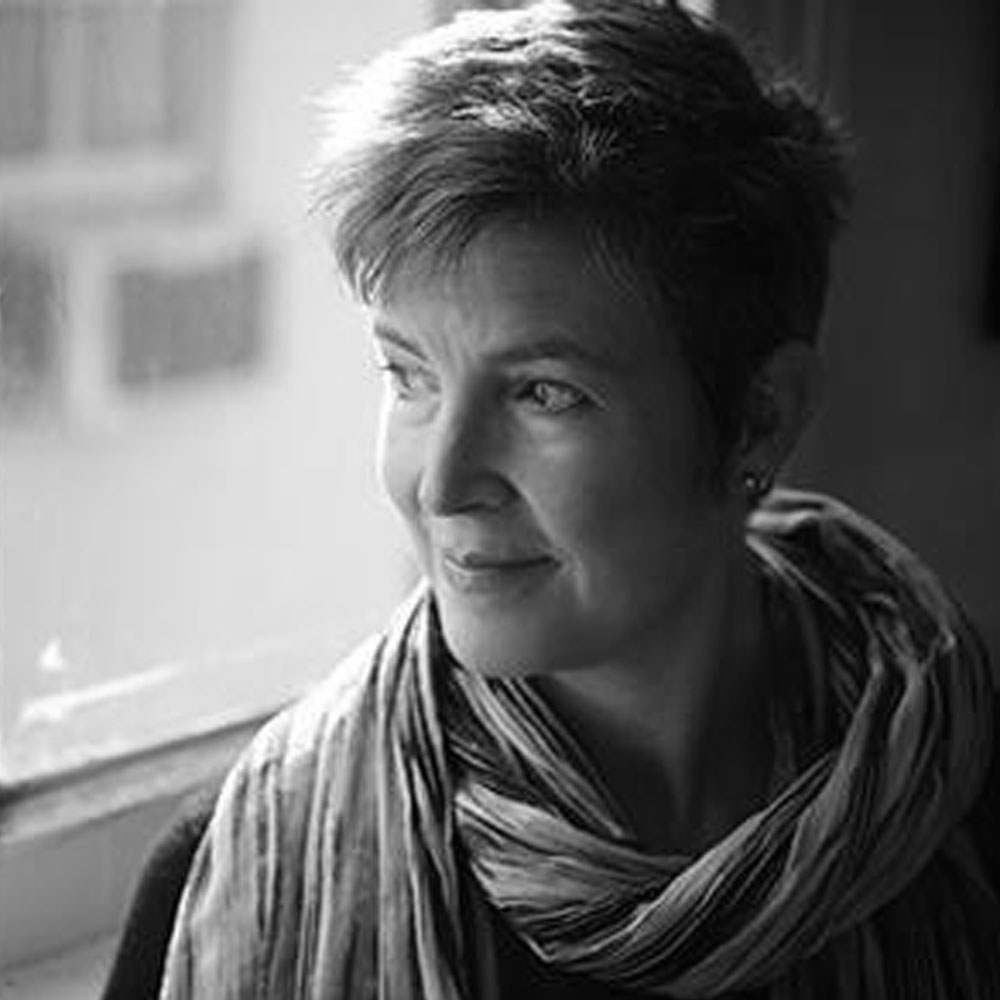 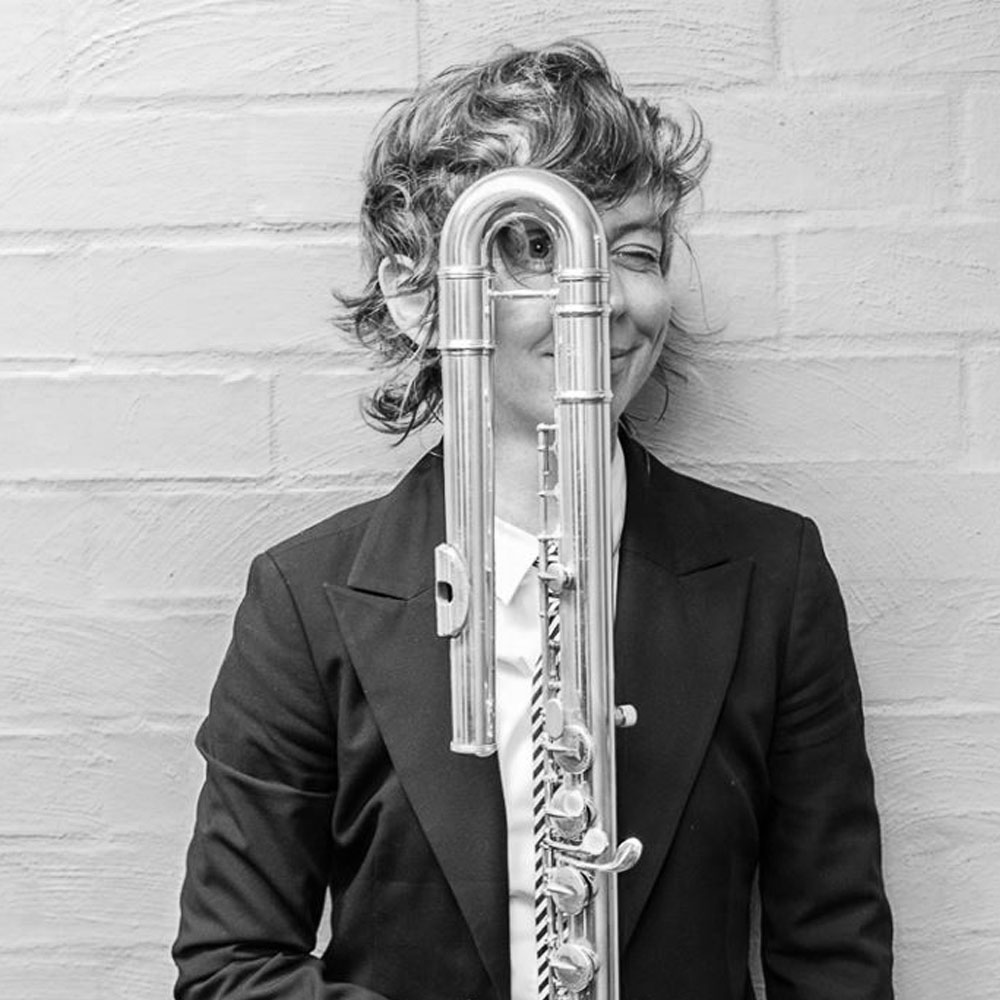 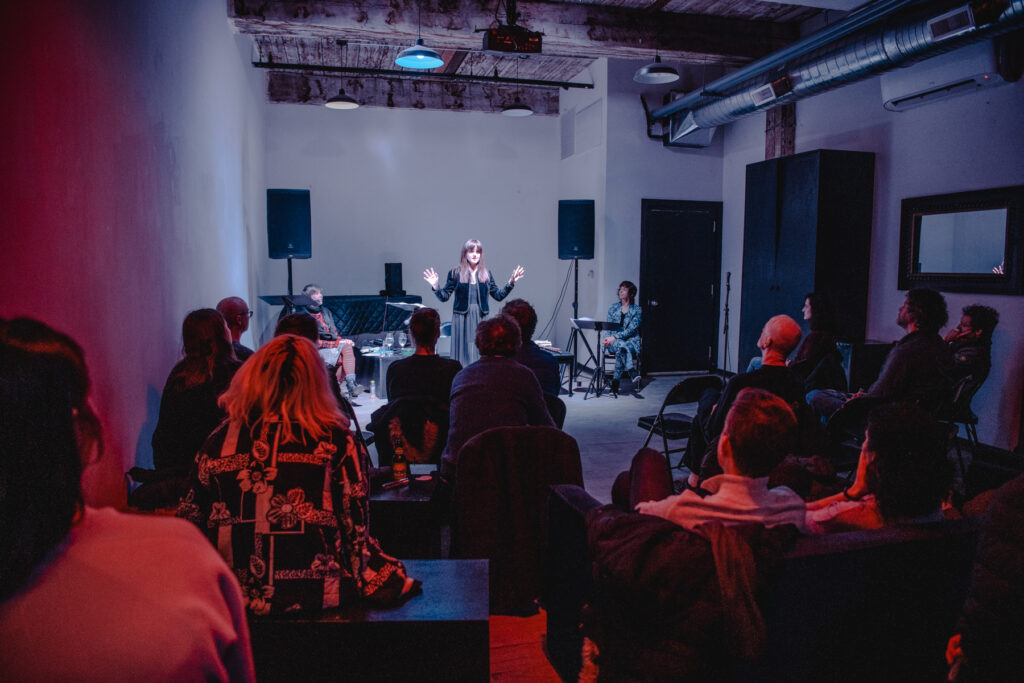 The New York instalment of Notes from a Biscuit Tin took, as its point of departure, a theme central to Midgley's work: namely, the capacity of art and philosophy (and poetry in particular) to correct flawed conceptions of the human relationship to the natural world. Poetry, philosophy and live music overlapped with and fed into each other in a cross-disciplinary exchange that one may feel confident Midgley would have endorsed.

Flutist Claire Chase opened the evening with a performance of Alone by Brazilian composer Marcos Balter (accompanied by co-hosts Jenny Judge and Laura Mullen 'playing' wineglasses tuned to B and E respectively), itself a musical response to a poem of the same name by Edgar Allen Poe. After that, philosopher Jenny Judge introduced the audience to Midgley's arguments in favour of the proposition that our responsibility toward the planet is moral in nature, explaining why Midgely thinks we need poets to help us to come to see the world aright. Poet Laura Mullen drew our attention back to the Poe poem with which we had begun, pointing out the anthropocentric flavour of the view of nature it expresses. She argued that a great deal of Western poetry has, in fact, served to entrench the increasingly problematic conception of mankind as masters of an earth that exists to serve their needs. But poetry can, of course, do better: Mullen went on to read her new poem, Answers, which expresses a very different conception of nature to that expressed by Poe. 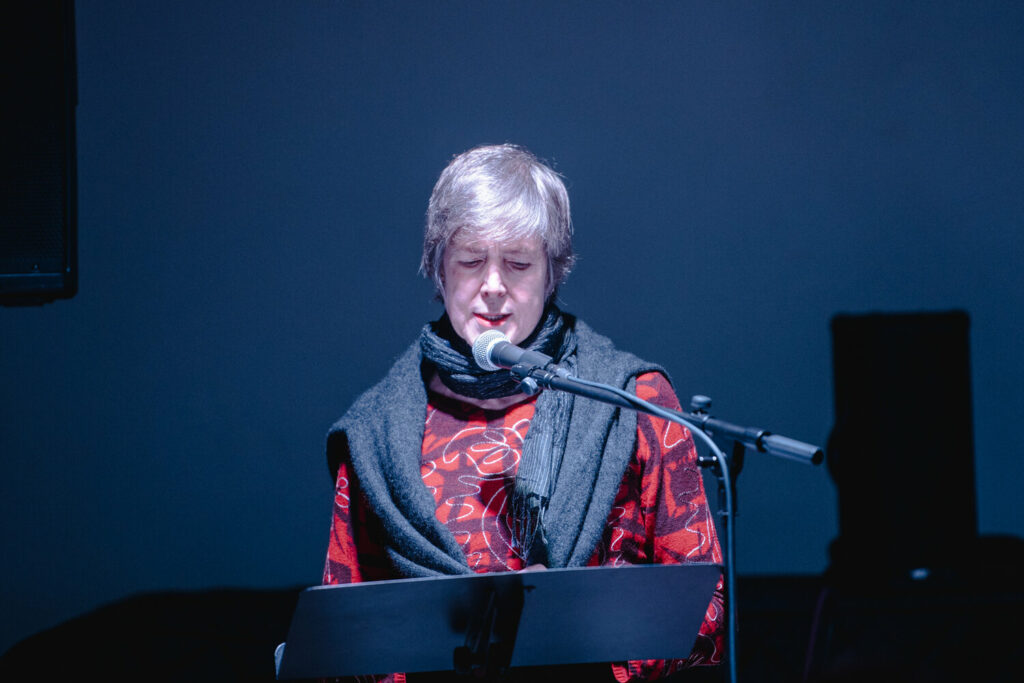 Following an exchange with the audience, Chase took to the stage again for performance of Echo, itself a movement of a larger work, PAN, by Marcos Balter. PAN is a semi-staged music drama for flute, electronics and mass community participation that tells the tale of the power and hubris of the Greek god Pan, evoking a mythical past wherein human culture had not yet defined itself in contradistinction from the natural world. After introducing the work, Chase distributed bamboo chimes and triangles to volunteers in the audience, proceeding to lead them through a collaborative performance of this highly virtuosic work. After an exchange with and among the audience in which questions were raised regarding Midgley's views on human reason, Mullen's poetic process, and the view (which Judge had attributed to Midgley in her introduction) that love is a moral emotion consisting in a certain kind of 'seeing' of value, Chase led the entire audience in a performance of Pauline Oliveros' Sounds from Childhood.

Philosophy is ill-served by being walled up in sterile seminar rooms, with access to it restricted to academic communities. The New York instalment of Notes from a Biscuit Tin was a convincing argument in support of this Midgleyan thought. And it also showed that philosophy really ought to be allowed to play with its natural artistic bedfellows more often. 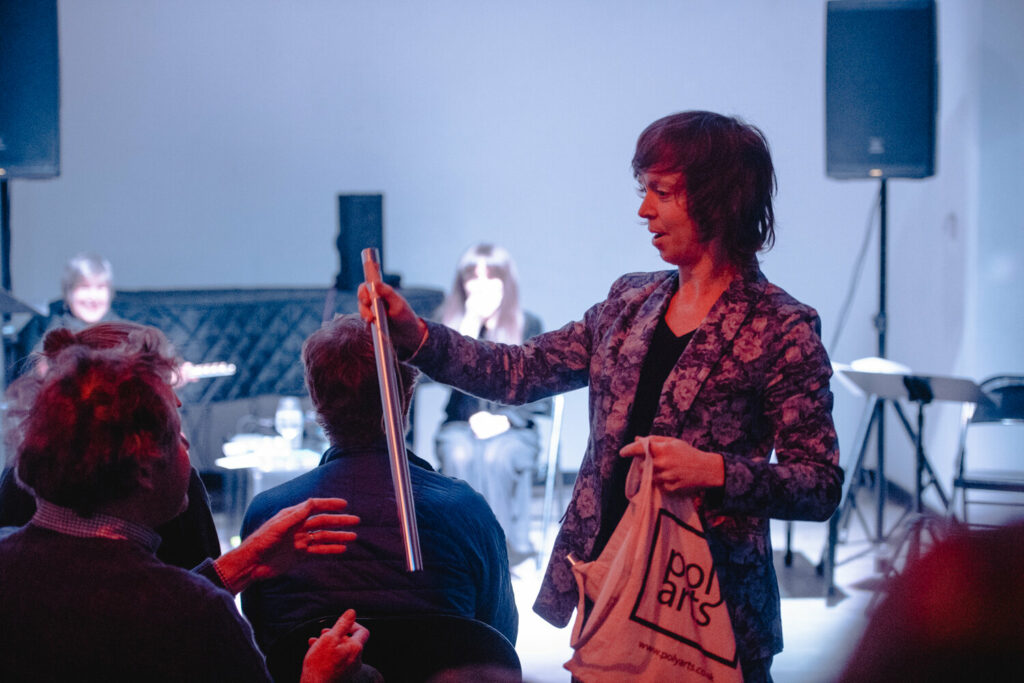 Poet Laura Mullen was born in Los Angeles in 1958. She earned her BA at the University of California-Berkeley and MFA from the Iowa Writers’ Workshop. Her collections of poetry include Enduring Freedom (2012), Dark Archive (2011), Murmur (2007), Subject (2005), After I Was Dead (1999), The Tales of Horror (1999), and The Surface (1991), which was a National Poetry Series selection. Known for writing book-length and hybrid texts, Mullen’s work has been praised for its wild invention and play. Her poems are included in anthologies such as American Hybrid (2009), The Arcadia Project: North American Postmodern Pastoral (2012), and I’ll Drown my Book: Conceptual Writing by Women (2012), among others. The composer Jason Eckardt’s setting of her poem “The Distance (This)” was released as Undersong by Mode records in 2011.

Mullen’s many honors and awards include foundations from the National Endowment for the Arts, the Rona Jaffe Foundation, and the MacDowell Colony. She is the recipient of the Ironwood’s Stanford Prize and a Creative Writing special interest delegate for the Modern Language Association. Mullen teaches in the Summer Writing Program at the Jack Kerouac School of Disembodied Poets at Naropa and is the McElveen Professor in English at Louisiana State University.

Claire Chase is a soloist, collaborative artist, curator and advocate for new and experimental music. Over the past decade she has given the world premieres of hundreds of new works for the flute in performances throughout the Americas, Europe and Asia, and she has championed new music throughout the world by building organizations, forming alliances, pioneering commissioning initiatives and supporting educational programs that reach new audiences. She was named a MacArthur Fellow in 2012, and in 2017 was awarded the Avery Fisher Prize.

In 2013 Chase launched Density 2036, a 23-year commissioning project to create an entirely new body of repertory for flute between 2014 and 2036, the centenary of Edgard Varèse’s groundbreaking 1936 flute solo, Density 21.5. Each season as part of the project, Chase premieres a new program of commissioned music, with six hours of new repertory created to date. In 2036, she will play a 24-hour marathon of all of the repertory created in the project. Chase will release world premiere recordings the first four years of the Density cycle in collaboration with the producer Matias Tarnopolsky at Meyer Sound Laboratories in Berkeley, CA.